Overview – The Definition of Knowledge

The definition of knowledge is one of the oldest questions of philosophy. Plato’s answer, that knowledge is justified true belief, stood for thousands of years – until a 1963 philosophy paper by philosopher Edmund Gettier challenged this definition.

Gettier described two scenarios – now known as Gettier cases – where an individual has a justified true belief but that is not knowledge.

Since Gettier’s challenge to the justified true belief definition, various alternative accounts of knowledge have been proposed. The goal of these accounts is to define ‘knowledge’ in a way that rules out Gettier cases whilst still capturing all instances of what we consider to be knowledge.

A Level philosophy looks at 5 definitions of knowledge:

It’s important to first distinguish the kind of knowledge we’re discussing here. Broadly, there are three kinds of knowledge:

In Theaetetus, Plato argues that knowledge is “true belief accompanied by a rational account”. This got simplified to:

‘Justified true belief’ is known as the tripartite definition of knowledge.

The name of the game in defining ‘knowledge’ is to provide necessary and sufficient conditions.

The correct definition of ‘knowledge’ will work the same way. Firstly, we can argue that ‘justified’, ‘true’, and ‘belief’ are all necessary for knowledge.

For example, you can’t know something if it isn’t true. If someone said, “I know that the moon is made of green cheese” you wouldn’t consider that knowledge because it isn’t true.

And finally, justification. Suppose someone asks you if you know how many moons Pluto has. You have no interest in astronomy but just have a strong feeling about the number 5 because it’s your lucky number or whatever. You’d be right – Pluto does indeed have 5 moons – but it seems a bit of a stretch to say you knew Pluto has 5 moons. Your true belief “Pluto has 5 moons” is not properly justified and so would not count as knowledge.

Gettier’s paper describes two scenarios where an individual has a justified true belief that is not knowledge. Both examples describe a belief that fails to count as knowledge because the justified belief is only true as a result of luck.

Smith’s belief “the man who will get the job has 10 coins in his pocket” is:

But despite being a justified true belief, we do not want to say that Smith’s belief counts as knowledge because it’s just luck that led to him being correct.

This shows that the tripartite definition of knowledge is not sufficient: you can have a justified true belief that is not knowledge.

Gettier’s second example is as follows:

So, Smith’s belief that “Either Jones owns a Ford or Brown is in Barcelona”  is:

But despite being a justified true belief, it is wrong to say that Smith’s belief counts as knowledge, because it was just luck that led to him being correct.

This again shows that the tripartite definition of knowledge is not sufficient.

Gettier cases are a devastating problem for the tripartite definition of knowledge.

In response, philosophers have tried to come up with new definitions of knowledge that avoid Gettier cases.

Generally, these new definitions seek to refine the justification condition of the tripartite definition. True and belief remain unchanged.

The no false lemmas definition of knowledge aims to strengthen the justification condition of the tripartite definition.

It says that James has knowledge of P if:

So, basically, it adds an extra condition to the tripartite definition. It says knowledge is justified true belief + that is not inferred from anything false (a false lemma).

This avoids the problems of Gettier cases because Smith’s belief “the man who will get the job has 10 coins in his pocket” is inferred from the false lemma “Jones will get the job”.

So, in this instance, the no false lemmas definition appears to be a more accurate account of knowledge than the tripartite view: it avoids saying Gettier cases count as knowledge.

However, the no false lemmas definition of knowledge faces a similar problem: the fake barn county situation:

According to the no false lemmas definition, Henry’s belief is knowledge.

But this shows that the no false lemmas definition must be false. Henry’s belief is clearly not knowledge – he’s just lucky in this instance.

A reliable method is one that produces a high percentage of true beliefs.

But if you form a belief through an unreliable method – for example by simply guessing – then it would not count as knowledge even if the resultant belief is true.

However, pretty much all the other definitions of knowledge considered here imply that animals and young children can not have knowledge. For example, a seagull or a baby can’t justify its beliefs and so justified true belief rules out seagulls and young babies from having knowledge. Similarly, if virtue epistemology is the correct definition, it is hard to see how a seagull or a newly born baby could possess intellectual virtues of care about forming true beliefs and thus possess knowledge.

However, both young children and animals are capable of forming beliefs via reliable processes, e.g. their eyesight, and so according to reliabilism are capable of possessing knowledge.

You can argue against reliabilism using the same fake barn county argument above: Henry’s true belief that “there’s a barn” is caused by a reliable cognitive process – his visual perception. Reliabilism would thus (incorrectly) say that Henry knows “there’s a barn” even though his belief is only true as a result of luck.

Linda Zagzebski: What is Knowledge?

Philosopher Linda Zagzebski argues that definitions of knowledge of the kind we have looked at so far (i.e. ‘true belief + some third condition’) will always fall victim to Gettier-style cases. She provides a formula for constructing such Gettier cases to defeat these definitions:

Zagzebski argues that this formula will always provide a means to defeat any definition of knowledge that takes the form ‘true belief + some third condition’ (whether that third condition is justification, formed by a reliable process, or whatever).

The issues resulting from the gap between truth and the third condition motivate Zagzebski to do away with the ‘truth’ condition altogether. Instead, Zagzebski’s analysis of knowledge is that James knows that P if:

However, in Zagzebski’s analysis of knowledge, the ‘truth’ of the belief is kind of implied by the idea of an act of intellectual virtues. This can be shown by drawing a comparison with moral virtue:

Intellectual virtue is similar: You must both have the correct motivation (e.g. you want to find the truth) and succeed as a result of that virtue (i.e. your belief turns out to be true because you acted virtuously).

Virtues motivate us to pursue what is good. In the case of knowledge, good knowledge is also true. Secondly, virtues enable us to achieve our goals (in the same way a virtuous i.e. good knife enables you to cut) and so intellectual virtues would enable you to reliably form true beliefs.

Another, more traditional, virtue epistemology definition of knowledge would be: 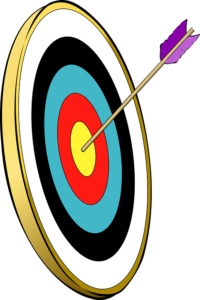 Philosopher Ernest Sosa illustrates the meaning of this last condition with the following archery analogy: He says that a virtuous shot in archery has the following three properties:

This last condition – aptness – differentiates Sosa’s understanding of knowledge from those criticised by Zagzebski. According to Sosa, for something to qualify as knowledge the belief must be true as a direct consequence of the believer exercising their intellectual virtues – it must be apt. Aptness provides a link between truth and the third condition that rules out Gettier-style situations where the belief is only true as a result of luck.

Returning to the fake barn county example, Sosa’s virtue epistemology could (correctly) say Henry’s belief “there’s a barn” in fake barn county would not qualify as knowledge – despite being true and formed by a reliable method – because it is not apt. Yes, Henry’s belief is accurate (i.e. true) and adroit (i.e. Henry has good eyesight etc.), but he only formed the true belief as a result of luck, not because he used his intellectual virtues.

As mentioned in more detail in the reliabilism section above, a potential criticism of virtue epistemology is that it appears to rule out the possibility of young children or babies possessing knowledge, despite the fact that they arguably can know many things.

Infallibilism argues that for a belief to count as knowledge, it must be true and justified in such a way as to make it certain.

So, even though Smith has good reasons for his beliefs in the Gettier case, they’re not good enough to provide certainty. Certainty, to philosophers like Descartes, means the impossibility of doubt.

In the Gettier case, Smith might have misheard the interviewer say he was going to give Jones the job. Or, even more extreme, Smith might be a brain in a vat and Jones may not even exist! Either of these scenarios – however unlikely – raise the possibility of doubt.

So, infallibilism correctly says Smith’s belief in the Gettier case does not count as knowledge.

But it also says pretty much everything fails to qualify as knowledge!

“I know that water boils at 100°c” – can this be doubted? Of course it can! Your science teachers might have been lying to you, you might have misread your thermometer, you might be a brain in a vat and there’s no such thing as water! 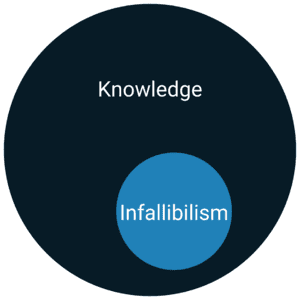 Pretty much any belief can be doubted, as Descartes demonstrates in his three waves of doubt.

So, whereas Gettier cases show the tripartite definition to set the bar too low for knowledge, infallibilism sets the bar way too high – barely anything can be known! In other words, we can argue that certainty is not a necessary condition of knowledge.