This A level philosophy topic looks at 3 theories of perception that explain how we can acquire knowledge from experience, i.e. a posteriori. They are:

The theories disagree over such issues as whether the external world exists (realism vs. anti-realism) and the way we perceive it (direct vs. indirect). Each theory also has various arguments for and against. These key points are summarised below:

Direct realism is the view that:

So, basically, what you see is what you get.

When you look at, and perceive, a tree, you are directly perceiving a tree that exists ‘out there’ in the world. You are also perceiving its properties (size, shape, smell, etc.).

So, the immediate objects of perception are mind-independent objects and their properties.

Direct realism is often thought of as the common sense theory of perception. When asked what you see, you describe the external object itself, not your perception of it. For example:

You wouldn’t respond with:

“Brown patches of sense data in a rectangular arrangement.”

At least on the face of it, perceptual experience presents itself to us as mind-independent objects. However, there are a number of issues with this simple explanation.

Differences in perceptual variation provide a problem for direct realism.

But the white spot is either there or it isn’t – it can’t be both! So, at least one of us is not perceiving the table directly as it is.

Russell also talks about the shape of a table. From directly overhead, it may appear to be rectangular. But from a few metres away it may look kite-shaped. Again, it can’t be both shapes!

These examples highlight differences in our perception of the table and the table itself. However, according to direct realism, there should be no such differences between perception and reality.

Direct realism can respond by refining the theory and introducing the idea of relational properties.

In other words: The object itself does not change, but the perceiver does – and thus the relational properties of the object change. 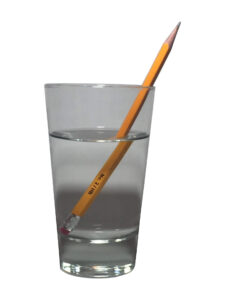 Remember, direct realism says that we perceive the external world directly as it is.

But if this is true, how is it that reality (i.e. the external world) can be different to our perception of it?

For example, when a pencil is placed in a glass of water, it can look crooked. But it isn’t really crooked.

If direct realism is true, the external world would be exactly as we perceive it. However, in the case of illusions, there is an obvious difference between our perception and reality.

Similar to the response to perceptual variation, the direct realist could reply that the pencil has the relational property of looking crooked to certain perceivers (even though it isn’t really crooked). However, this response fails to explain the argument from hallucination.

This is a more extreme version of the argument from illusion.

Direct realism says that when we perceive something, we are perceiving something in the external world (directly).

But during hallucinations – perhaps as a result of being ill or taking drugs – we perceive things that aren’t even there.

So what is causing these perceptions? It can’t be the external world – at least not directly – because there is no external object being perceived at all!

This means it takes approximately 8 minutes for light to reach earth.

So, when you look at the sun, you are seeing it as it was 8 minutes ago – i.e. there is a difference between the sun itself and your perception of it. In other words, you are not perceiving the sun directly.

Indirect realism is the view that:

Indirect realism says the immediate object of perception is sense data. This sense data is caused by, and represents, the mind-independent external world.

Instead, they claim that what we really perceive is sense data.

Sense data can be described as the content of perceptual experience.

It’s not a physical thing, it exists in the mind. However, sense data is said to be caused by and represent mind-independent physical objects (see diagram above).

Sense data is private. No one else can experience your sense data.

This avoids the problems with direct realism described above. For example, differences in perceptual variation can be explained by differences in sense data. The object itself stays the same throughout even if the sense data changes.

An idea closely related to sense data is John Locke’s distinction between primary and secondary qualities:

One such example is porphyry – a red and white stone. Locke says that when you prevent light from reaching porphyry, “its colours vanish”. However, the primary qualities – size, shape, etc. – remain.

For a problem with this view, see Berkeley’s criticism of the distinction between primary and secondary qualities.

A problem for indirect realism is that it leads to scepticism about the nature and existence of the external world.

Look at the two diagrams above. What would be the difference from the perceiver’s perspective between the two? What difference would it make to the perceiver if there was no physical world at all?

The answer, surely, is nothing.

We can’t get beyond the veil of perception (sense data) to access the external world behind it. So, what grounds does the indirect realist to support their claim that there is a mind-independent external world the causes sense data?

Bertrand Russell, an indirect realist, concedes that there is no way we can conclusively defeat this sceptical argument. However, he argues that the existence of a mind-independent external world is the best explanation for sense data.

First, Locke notes how he is unable to avoid having certain sense data produced in his mind when he looks at an object. By contrast, memory and imagination allows him to choose what he experiences. Locke concludes from this that whatever causes his perceptions must be something external to his mind as he is unable to control these perceptions.

However, even if Locke succeeds in proving something external, he doesn’t succeed in proving that sense data is in any way an accurate representation of the external world. The sceptic could argue that the external world may be completely different to our perception of it and there’s no way we could know.

Second, Locke argues that the different senses confirm the information of one another. For example, you can write something on a piece of paper and see the words. Then, you can get someone to read the words out loud and thus hear the same information via a different source.

Idealism is the view that:

In other words, the immediate objects of perception are mind-dependent ideas.

Unlike direct realism and indirect realism, idealism says there is no mind-independent external world. Hence, idealism can be classed as an anti-realist theory.

Instead, idealism claims that all that exists are ideas.

What’s more, idealism says that unless something is being perceived, it doesn’t exist!

Bishop George Berkeley (1685-1753) is the most famous proponent of idealism.

Berkeley offers various arguments against the existence of a mind-independent external world. These arguments include a variation of the sceptical argument described earlier. Berkeley asks how – if realism is true – we can link up our perception with the objects behind it. Again, it seems we can’t look past the veil of perception.

He later gives his master argument: An argument that the very idea of mind-independent objects is inconceivable and impossible.

Berkeley argues that the only thing our senses perceive are qualities, and nothing more. For example, we perceive colours and shapes via vision, sounds via hearing, flavours via taste, and so on.

But we never perceive anything in addition to these qualities.

This claim forms the basis of one of Berkeley’s arguments against the existence of a mind-independent external world.

“Take away the sensation […] and all colours, tastes, odours, and sounds […] vanish and cease, and are reduced to their causes”

Based on this extract, Locke seems to be saying that secondary qualities are mind-dependent.

Berkeley himself provides his own arguments that secondary qualities are mind dependent. For example, heat (a secondary quality) can be experienced as pain (mind-dependent). When you burn your hand on a hot fire, you don’t feel the pain and the heat separately. You feel one sensation: painful heat.

So, it seems Berkeley and Locke are in agreement so far: secondary qualities are mind dependent.

Where Berkeley disagrees with Locke is the status of primary qualities. Locke says they’re mind-independent, but Berkeley argues they’re not.

Berkeley offers various versions of perceptual variation to support the claim that primary qualities depend on the mind just as much as secondary qualities do:

Size, shape, and motion: they are all primary qualities but these examples show how our perception of them differs depending on the circumstances.

So, Berkeley argues, we can’t say these objects have one single size, shape, or motion independent of how it is perceived. So, primary qualities are also mind-dependent.

Bring together Berkeley’s points and we get the following argument:

So, Berkeley uses Locke’s primary and secondary quality distinction to prove that everything we perceive is mind-dependent. This implies that there is no such thing as a mind-independent external world (and so realism is false).

The second of Berkeley’s arguments for idealism/arguments against indirect realism is known as the master argument.

The dialogue (between Hylas and Philonous) for the master argument can be summarised as: 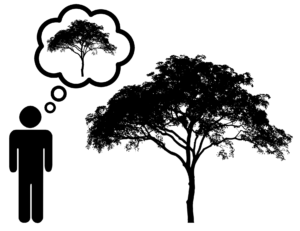 God as the cause of perceptions

Despite arguing against the existence of a mind-independent external world, idealism does not lead to the same veil of perception problem that indirect realism does. The veil of perception disappears when we realise that the meaning of words like ‘physical object’ refer to bundles of ideas and not mind-independent objects (as realism assumes). By perceiving ideas, we are perceiving reality. That’s what reality is: ideas.

This still leaves the question of what causes these ideas. Berkeley’s answer is God, and his argument is this:

The role of God here resolves an obvious objection to idealism: If Berkeley’s theory is true, then presumably my desk and everything in my office no longer exist when I leave the room and stop perceiving them. So, why are they still there when I get back? Berkeley’s response is that the office (and all ‘physical objects’) constantly exist in the mind of God.

What we perceive, Berkeley says, are copies of ideas that exist eternally in God’s mind (when He wills me to perceive them). This resolves another potential criticism: We might object that when you and I both look at the same tree, we are perceiving different things – i.e. two separate ideas. However, since we are both perceiving the same copy of God’s idea, we both can be said to be perceiving the same thing.

Solipsism is the view that one’s mind is the only mind that exists.

And Berkeley’s earlier argument – that everything one perceives is mind-dependent – suggests that there is no reason to believe anything exists beyond one’s experience.

I never perceive other minds, all I perceive are ideas – so what reason do I have to believe that other minds exist at all?

As a direct theory of perception, idealism makes no distinction between appearance (perception) and reality.

But this makes it difficult to explain the argument from illusion that is also a problem for direct realism. For example, why does a pencil in water look crooked when it isn’t?

But what about hallucination? If, as Berkeley contends, “to be is to be perceived” – are we to say that hallucinations are just as real as ordinary perception? Also, why would God cause such perceptions?

<<<The Definition of Knowledge