A level metaethics is about what moral judgements – e.g. “murder is wrong” – mean and what (if anything) makes them true or false.

The main debate is about whether mind-independent moral properties exist or not:

But there is also a second – related – debate about what moral judgements mean:

(cognitivism/non-cognitivism also crops up in religious language as well as moral language).

You’ve also got 5 specific metaethical theories, that can be divided up according to the two categories above: 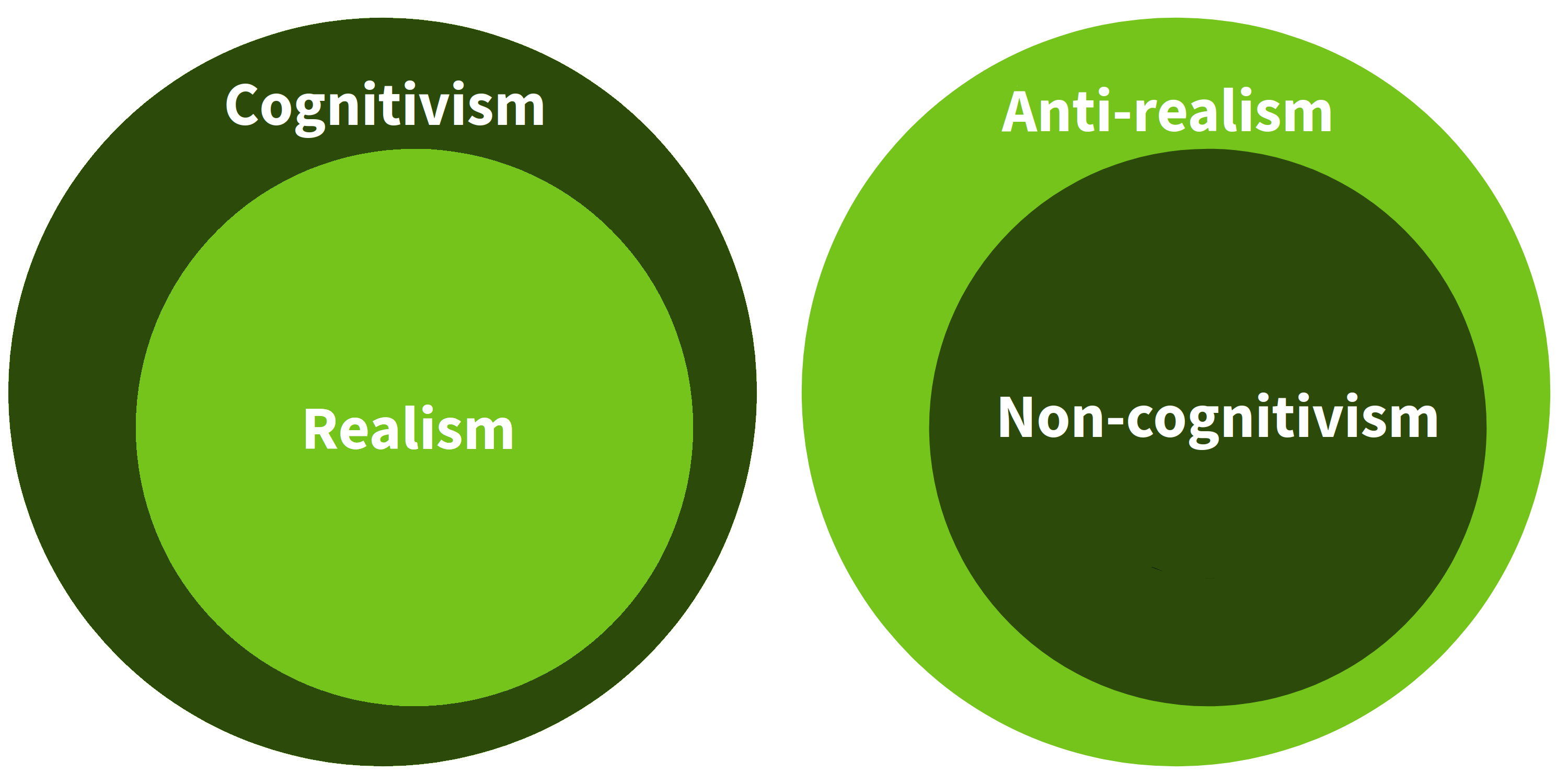 So, it’s important to be clear on the differences between what the categories are about:

But there is disagreement among realists as to what these mind-independent moral properties actually are:

Both ethical naturalism and ethical non-naturalism are cognitivist theories: they agree that moral judgements express beliefs that are capable of being true or false.

Ethical naturalism says that moral judgements are beliefs that are intended to be true or false (cognitivism) and that moral properties exist (realism) and are natural properties.

So, according to ethical naturalism, “murder is wrong” expresses a cognitive belief that murder is wrong – where ‘wrong’ refers to a natural property.

John Stuart Mill argues that happiness is not only good, it is the only good. Other things we desire – such as truth and freedom – are part of what happiness is to us. Mill provides the following metaethical argument for utilitarianism:

He invents the term ‘naturalistic fallacy’ to describe the fallacy (i.e. bad reasoning) of equating goodness with some natural property (such as pleasure or pain). For example, Moore would say it is a fallacy to conclude that drinking beer is good from the fact that drinking beer is pleasurable because they are two completely different kinds of properties – one moral, one natural. Even if pleasure and goodness are closely correlated, it doesn’t and could not follow that they are the same thing. So, Moore would argue that Mill’s proof of utilitarianism is invalid: To conclude that happiness (a natural property) is good (a moral property) commits the naturalistic fallacy.

Moore’s argument here – that you can’t logically jump from natural to moral – is very similar to Hume’s is/ought gap.

Moore further argues that it is an open question whether ‘pleasure’ and ‘good’ are the same thing:

Having argued against ethical naturalism, Moore sets out his own version of ethical non-naturalism, which he calls intuitionism.

Moore’s response to this problem is intuition. He argues that, via the faculty of rational intuition, we can directly reflect on the truth of moral judgements such as “murder is wrong”. The truth/falsehood of such moral judgements is said to be self evident.

Anti-realist metaethical theories argue that mind independent moral properties do not exist. So, there are no such things as true moral facts.

So, according to error theory, the statement “murder is wrong” expresses a cognitive belief that murder is wrong – but ‘wrong’ refers to a non-existent property and so the statement is false. It’s like if someone believed a colour called ‘blellow’ existed and said “grass is blellow” – this statement would be false because ‘blellow’ doesn’t exist.

Not only that, ordinary language assumes cognitivism as well. To illustrate this, Mackie uses the example of someone facing the moral dilemma of whether to engage in research related to bacteriological warfare. In trying to resolve this dilemma, you don’t ask how you feel about it – you ask whether such action is wrong in itself.

Having established that moral judgements are cognitive and thus aim to be true or false, Mackie next turns his attention to the nature of moral properties. Mackie argues that such moral properties do not exist (i.e. he argues for moral anti-realism).

The argument from relativity

Mackie’s first argument for anti-realism starts by pointing out that there are variations in moral beliefs between cultures (and between the same culture at different time periods).

If moral realism is correct, there would only be one objectively correct answer to all of these issues. Why, then, is there so much disagreement on these issues? Cultures that are independent of each other tend to form completely different moral practices and beliefs. We can explain this disagreement in one of two ways:

Mackie’s argument is that the second option is the more plausible account. If moral realism were true, you wouldn’t expect to see such divergent moral beliefs.

To put it another way, if there were objective moral properties and facts (i.e. if moral realism were true), you would expect every culture to eventually discover these moral facts in a similar way to how every culture has discovered other objective truths such as “1+1=2”.

The argument from queerness

Mackie’s main argument for moral anti-realism is that moral properties would have to be very strange (or ‘queer’, to use Mackie’s term). His reasons:

Another way of getting at the metaphysical weirdness is to question how moral facts relate to natural facts. Imagine someone stealing from a shop. Then imagine someone stealing from a shop and that this action has the property of wrongness. What’s the difference between the two cases? What does the property of ‘wrongness’ add to the natural facts of the situation? It’s not clear.

So, according to emotivism, when someone says “murder is wrong!”, what they really mean is “boo! murder!”

(By the way, “boo!” here is like when people “boo!” at a football match, not “boo!” like when you jump out at someone to scare them. This doesn’t really come across in text…)

Notice how none of these attitudes are capable of being true or false. They are just expressions of approval or disapproval – not beliefs. Hence, emotivism is a non-cognitivist theory.

(you can use these arguments to argue against any of the cognitivist theories: naturalism, non naturalism and error theory)

So, Hume’s argument here is essentially:

If you remember Hume’s fork from epistemology, Hume argued there are just two types of judgements of reason (i.e. cognitive judgements): relations of ideas and matters of fact.

Hume argues that moral ought statements are a completely different kind of thing to factual is statements.

Hume argues that there is a gap between the two kinds of claim: You cannot logically derive ought statements like ‘you ought not torture’ from statements about what is, such as ‘that is an act of torture’. We can argue that this is evidence for non-cognitivism: the reason we cannot derive ‘ought’ statements from ‘is’ statements is because the former type of statement is non-cognitive while the latter is cognitive.

Morality, therefore, is more properly felt than judg’d of

(The verification principle also comes up in religious language)

The verification principle: a statement only has meaning if it is either:

Any statement that does not fit these descriptions is meaningless, according to the verification principle.

So, moral judgements are not analytic truths, nor are they empirically verifiable. Therefore, according to the verification principle, they are meaningless.

Instead of expressing factual statements about the external world, Ayer concludes that moral judgements simply express feelings of approval or disapproval and seek to evoke the same feelings in others:

“If I say to someone, “you acted wrongly in stealing that money” […] I am simply evincing my moral disapproval of it. It is as if I had said, “You stole that money,” in a peculiar tone of horror.”

So, according to prescriptivism, when someone says “murder is wrong!”, what they really mean is something like “don’t murder people!”

When you instruct someone to do something – e.g. “shut the door” – you are not expressing a belief that is capable of being true or false. Hence, emotivism is a non-cognitivist theory.

R.M. Hare: The Language of Morals

As well as the above analysis of moral judgements, Hare provides an analysis of general value terms such as ‘good’, ‘bad’, ‘right’, and ‘wrong’. Hare argues that the meaning of these terms is not simply to describe but mainly to commend or criticise.

But in order to commend (or criticise) something, we must assume a certain set of standards. In the example above, the standards against which I commended the strawberry were ‘sweet and juicy’. However, these standards are not objective and there are no facts that can determine one set of standards as correct or incorrect.

Returning back to moral value judgements, these work in a similar way to the strawberry: When I say “she is a good person” I am assuming a certain set of moral standards and commending that person against those standards. This commendation is the primary meaning of ‘good’ and provides (imperative) guidance on how others should act.

But if non-cognitivism is correct, it’s hard to see how this is a valid argument at all. It seems the meaning of “murder is wrong” changes between the first and second premises:

The problem for non-cognitivism is that people regularly embed moral judgements in statements like in premise 1 above – they say things like “if murder is wrong then” and “if stealing is bad then”.

If moral anti-realism is true, it can be argued that this leads to moral nihilism: the view that no actions are inherently wrong. There’s nothing true about moral judgements such as “murder is wrong”. This then raises the question of why anyone should bother to be moral at all.

Non-cognitivists can respond that just because there’s no inherent right or wrong, people still have moral attitudes and feelings. And the realisation that moral values are just expressions of feelings doesn’t mean we should (or could) stop having these moral feelings.

It’s also somewhat self-defeating to be a moral nihilist according to non-cognitivism. After all, living as if there are no moral values is itself an expression of a certain attitude or feeling.

There may also be practical reasons to behave as if some moral judgements are true. For example, if you were always stealing from your friends, chances are they wouldn’t remain friends with you for very long.

Our moral values have changed over time. For example, it was considered morally acceptable to keep slaves back in the time of Plato but it’s not today.

If we accept that such changes are examples of moral progress, then we can make an argument along these lines:

This is a somewhat question-begging argument though. The second premise essentially assumes the conclusion. Why should the anti-realist accept there’s been objective moral progress when he doesn’t accept the existence of objective morality in the first place?

However, we can define moral progress in less question-begging ways. For example, we could argue that our morality has become more consistent over time, or that we have adapted our moral values in response to greater knowledge of the facts.